All change at Bush’s place. An object lesson in the fecundity of things. Variety is the spice as Wittgenstein pitches us into musical chairs, tables, apples and shoes with his thoughts on certainty, or its lack.

“What prevents me from supposing that this table eiter vanishes or alters its shape when no one is observing it and then when someone looks at it again it changes back? But ne feels like sayin – who is going to suppose such a thing?”
Ludwig Wittgenstein, On Certainty (1949-51)
Paul Bush Accepts the cahllenge of he philosopher and chabges nt only a table, but also chairs, shoes, jugs, teapots, and almost anything and everything lying around his house.

Nikolay Moustakov, Jane Bush, Mina Mileva, and all who lent or moved furniture. 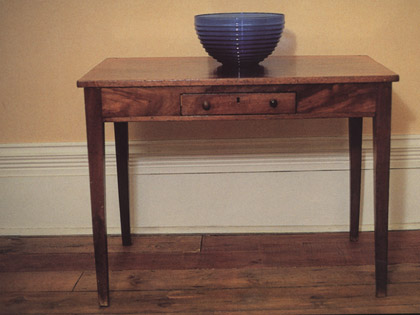